Working with characters and cast

Characters are central to a production. Here we show how to add information to a character page, but also what useful information is added and displayed automatically. Below you also find instructions on how to add scene items such as wardrobe items and props to a character as well as standard sizes and custom measurements.

Where do I find Characters & Cast?

You’ll find Cast & Characters in the sidebar menu under that name.

In the Cast & Character section, you’ll find the following:

You have three ways of adding characters to Dramatify to be able to link to a cast member, get lists and statistics as well as being able to add wardrobe, makeup & hair and continuity. When you work with entertainment or non-fiction, the character is linked to the cast member under their real name.

The latter method is the easiest and most common when you work with fiction screenplays. Here is an article on how to import a screenplay.

To add a new character, click on Cast & Characters in the right-hand sidebar menu, then on the blue button with “Add character“.

Flesh out your character

Note that Suffix is used when adding stunt persons, body doubles and stand-ins. Learn more below! 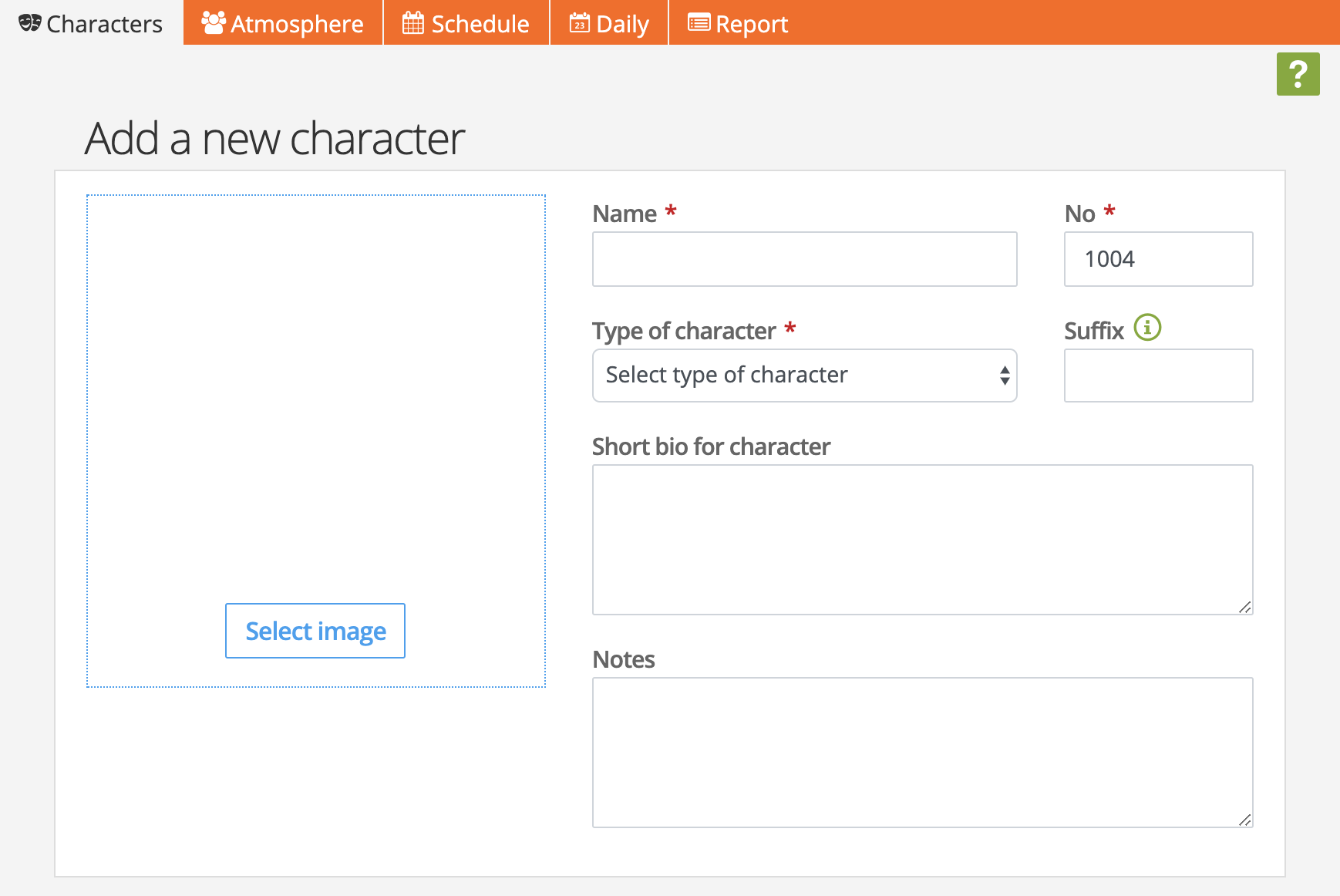 Note, that unlike other cast members, atmosphere cast is never invited to Dramatify. You can add how many is needed and then add numbers as you book. You can then also add who is booked, contact information and upload a release. This information will then be added automatically to the Daily Production Report on the correct day/s.

If you add atmosphere/background cast during script breakdown, you will see the atmosphere groups and how many needed already in the list below. 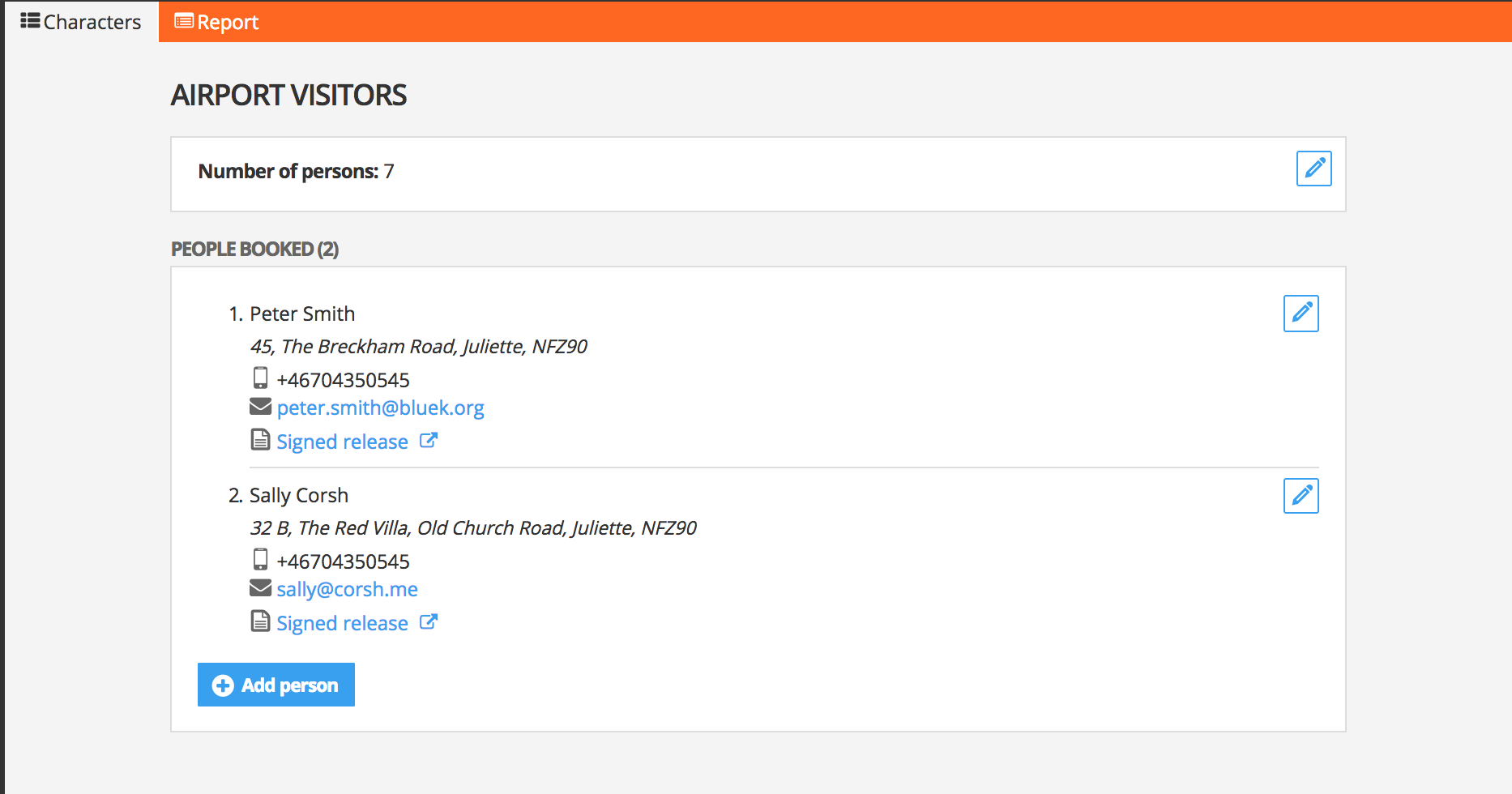 When you import a screenplay in .fdx, you will be presented with a list of all characters with dialogue in the script. You can either skip and not import any characters, or do a “mini-breakdown”.

Dramatify will automatically suggest a character type based on participation frequency percentage but you can always change that manually. You may also want to go through all characters and see that their names are spelled correctly and that there are no extra characters due to misspellings.

If a post shows up in the character list that shouldn’t be imported, simply click on the red “Do not import” button and it will be skipped.

In the case of documentaries, factuals, talk shows and entertainment where people appear under their real names as themselves or a speaker voice, you just add their real name as the character name and check the box “This character is played by Herself/Himself/Itself”.

As with other character types, you need to add the cast member to the character by selecting them in the “Select Cast member” dropdown shown in the image below, or by inviting them by clicking in the button “Invite new cast member”. 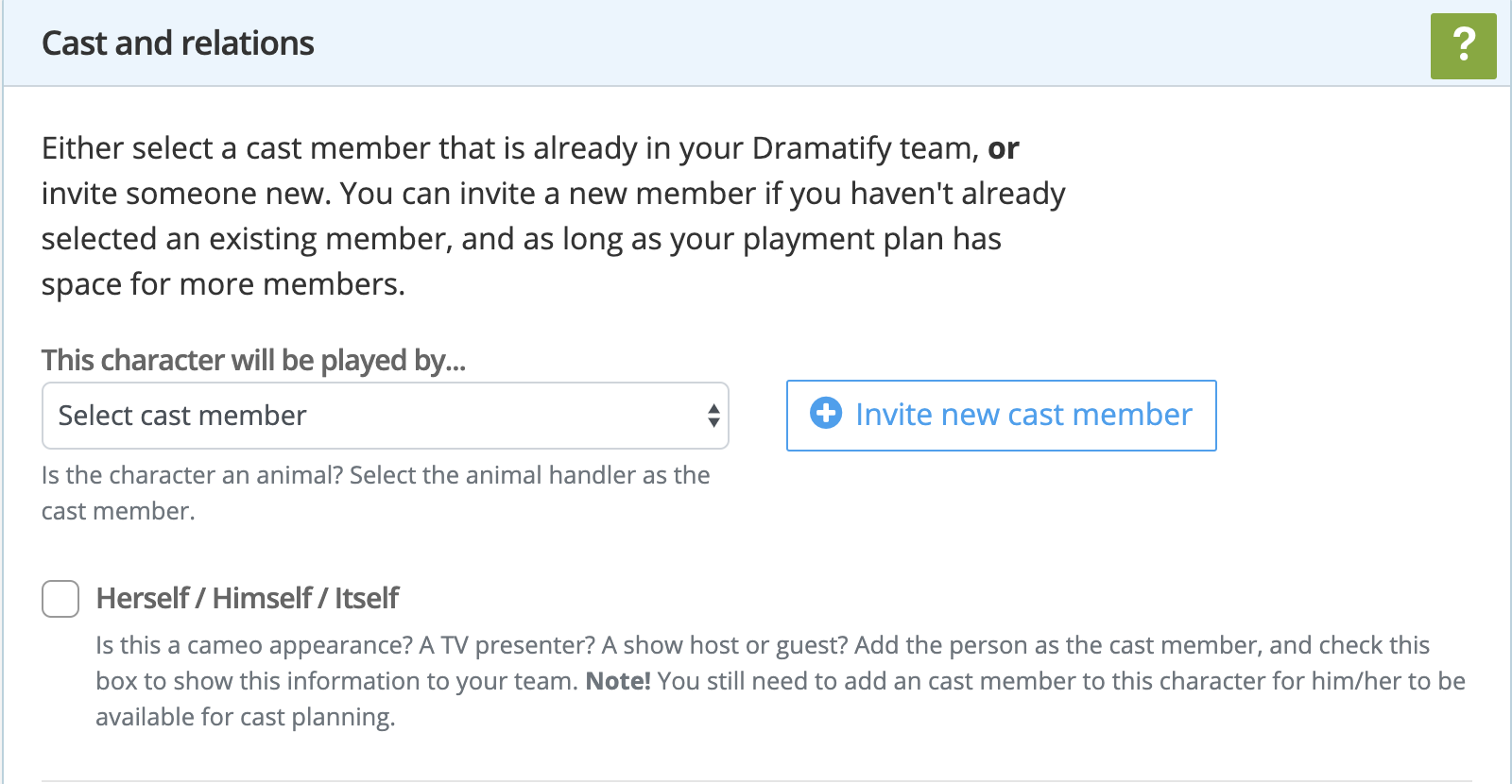 Here is how to add characters and atmosphere during breakdown:

Just start writing the first letters of an existing character and Dramatify will suggest alternatives. Just click on the right one. 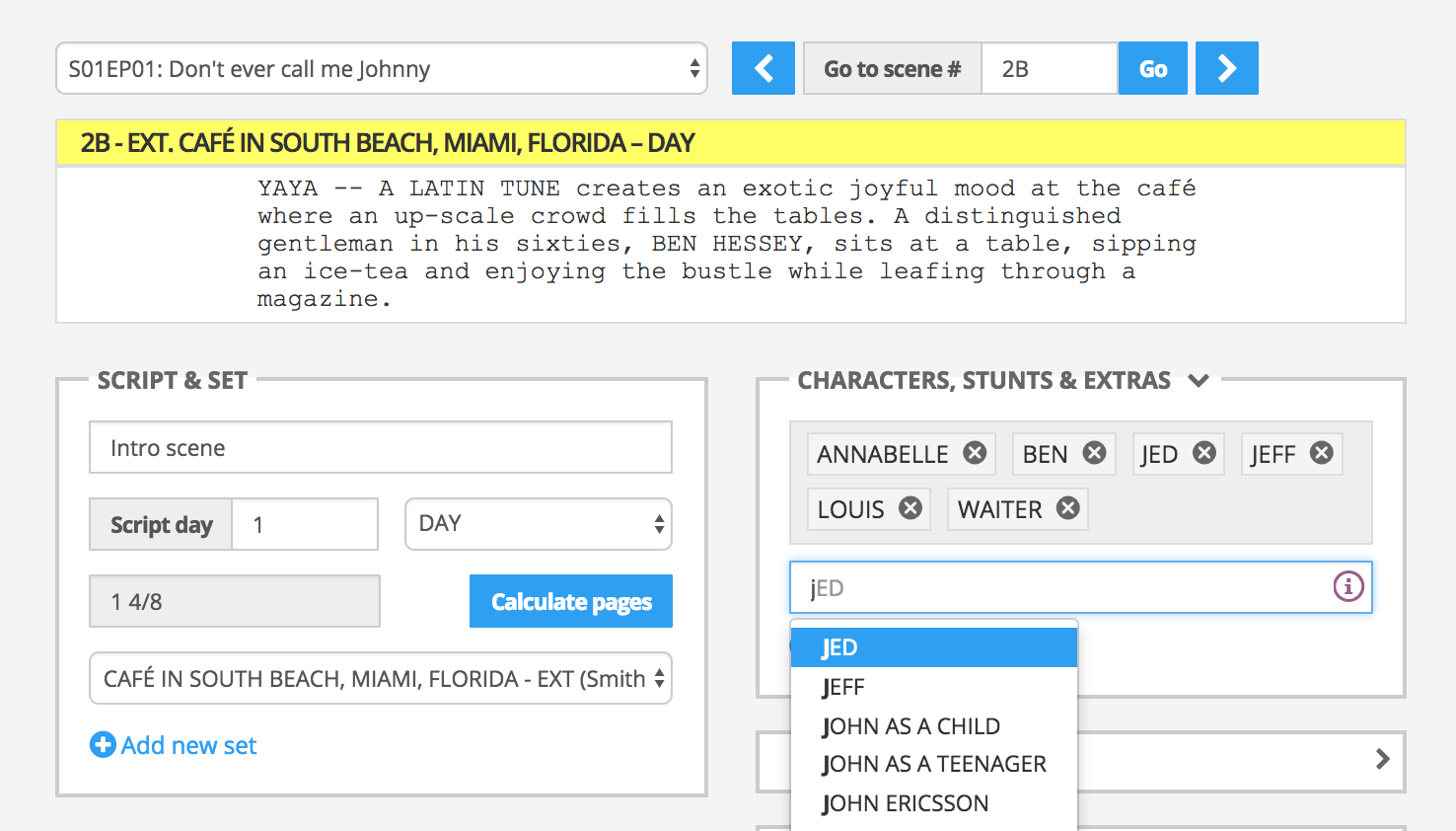 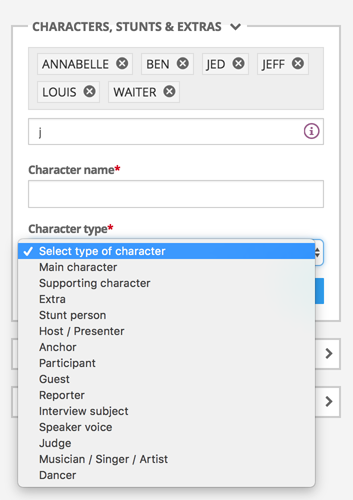 To add a new character, just click the link “Create new character” (hidden under the name dropdown in the image above) and you’ll get a popup window.

If you have imported a screenplay, you’ll find all imported characters already in place. Note that Dramatify reads the import file. Normally all characters with dialogue in the scene will be imported. In addition, if the screenwriter has tagged non-speaking characters, they have been added as well. It is good practice to browse the script text to make sure that non-speaking characters have been added, or make decisions if voice-overs/speaker parts should be added to the character as the character will show up in scene scheduling and call sheets.

Adding a cast member to a character

To get cast information, cast calls, timesheets, catering lists and daily production reports correct, you need to connect the cast member to the character. If you invite the cast member to Dramatify, they can also view call sheets and cast calls and – if you add script permissions – also read scripts.

How to add a cast member

To add a cast member:

Add cast to a fictional character 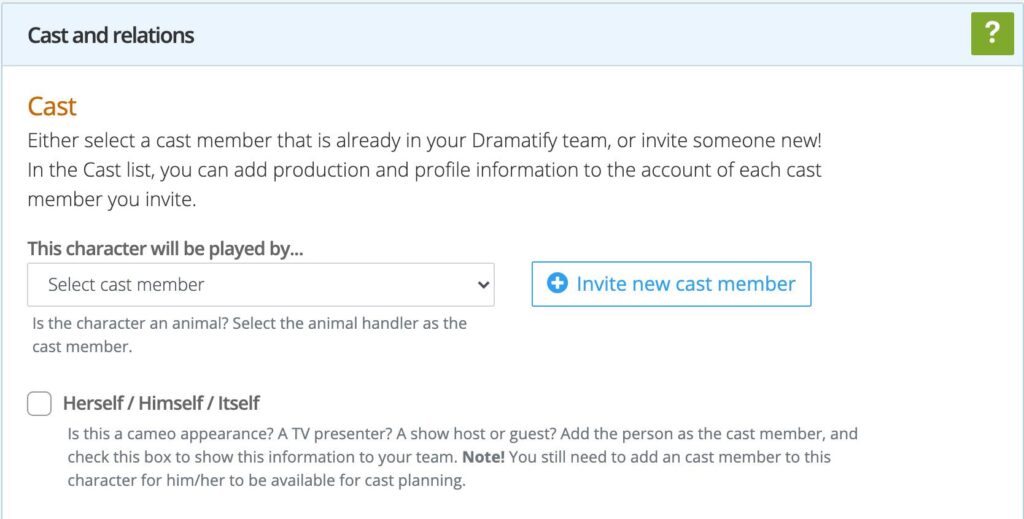 Click the dropdown menu to add an existing cast member to the character, or click the button to invite a new cast member. 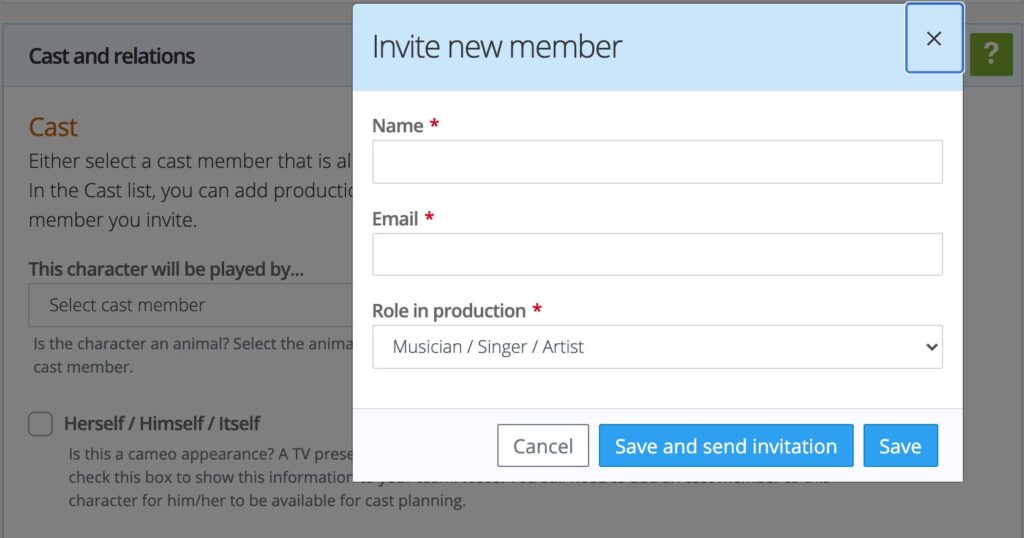 When adding a new cast member, you can either send an invitation immediately or save to send the invitation at a later date

Re-casting / changing the cast member for a character

To change the cast member for a character, go to the character’s page and click on “Edit” in the upper right corner.

In the Cast and relations sections, either: 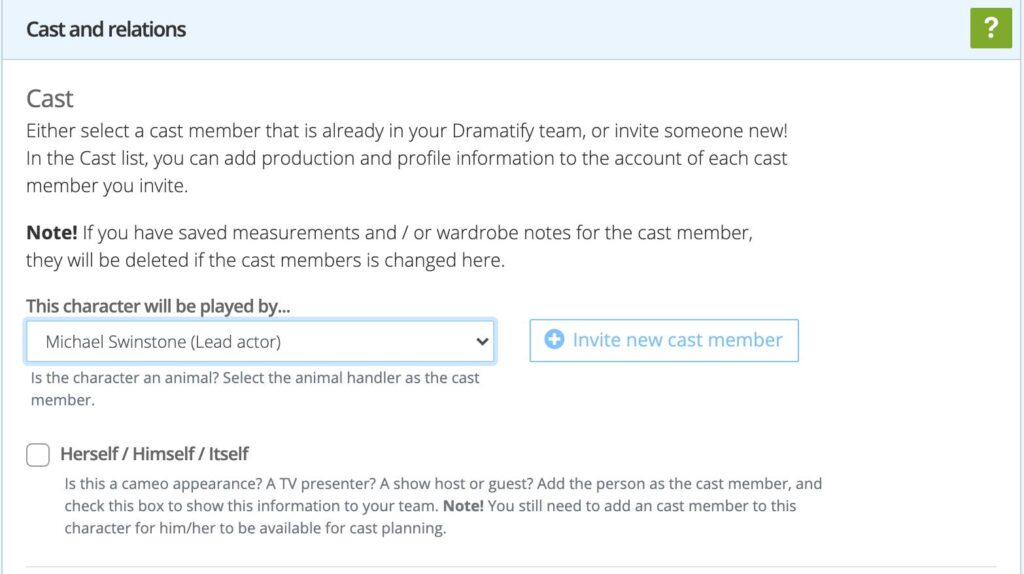 a) First use the dropdown menu and select the first option “Select cast member”, then

b) click on the button “Invite new cast member”. 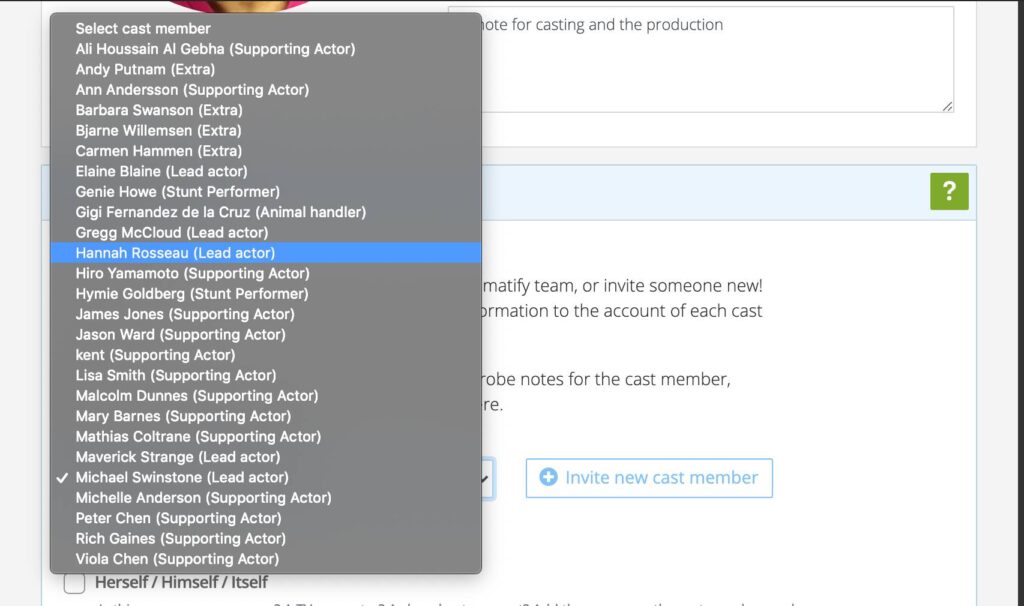 Removing or shutting off access for a cast member

Removing a cast member from the production

The character statistics are available on the Cast & Character page immediately underneath the basic character information.

For drama, it’s a useful tool for in-depth statistics for scheduling, budgeting and casting from the character page. If you import a screenplay, the correct statistics should be immediately available provided all scenes are categorised during the import with int/ext and time of day. That usually happens automatically, but you may want to check scenes that have other designations (“Back to”, “Insert” etc.) as well as if a character is non-speaking in a scene and that has not been tagged in the screenplay before import, or in the breakdown after import. 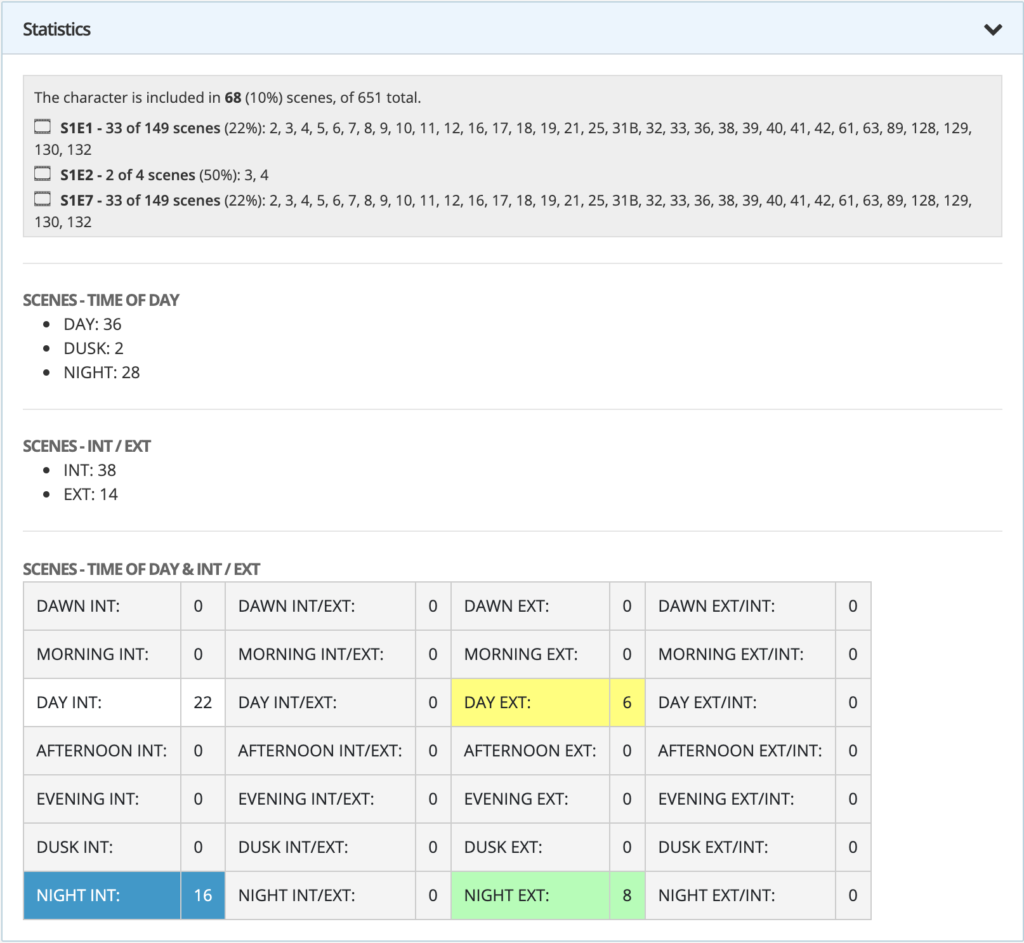 You can edit the information about a character at any time, as well as connect it with a cast member so that he or she gets access to team messages, scripts and call sheets.

Just click on the character you want to edit. 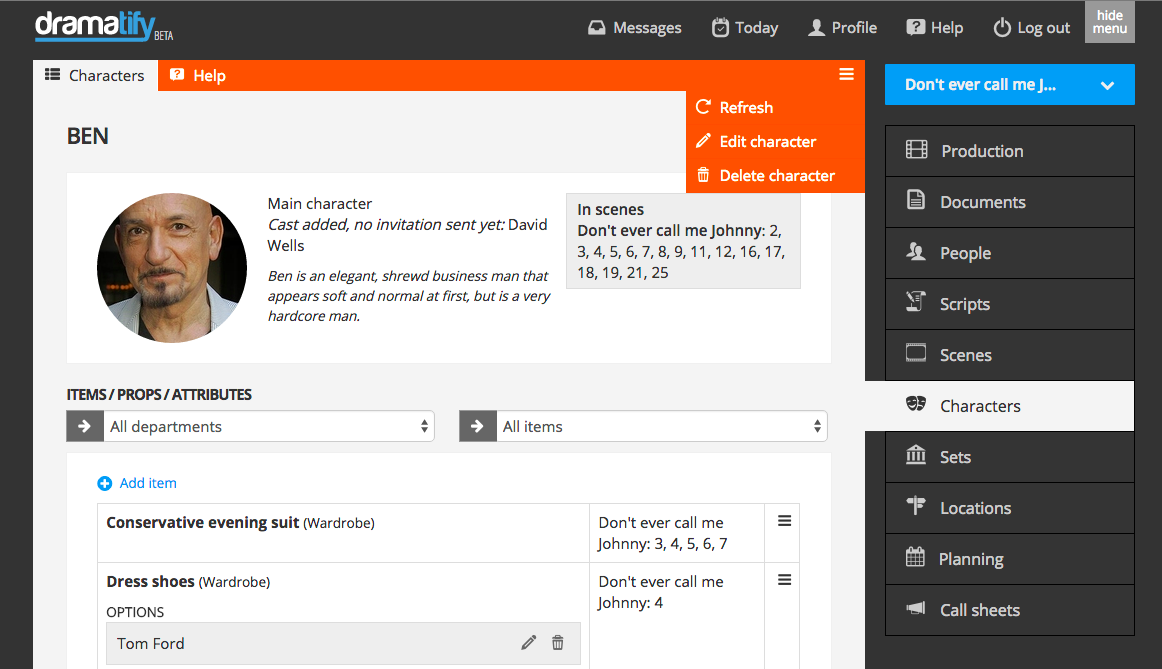 Adding and editing Character scene items outside of the breakdown

Scene items are any items like props, wardrobe, special effects etc. that is mentioned in the script. Anything specifically mentioned in the script is usually added during breakdown. In the middle of the page you find all the scene items that’s been added and you can filter them on department. At the bottom of the page, you find the items added during breakdown listed per scene. 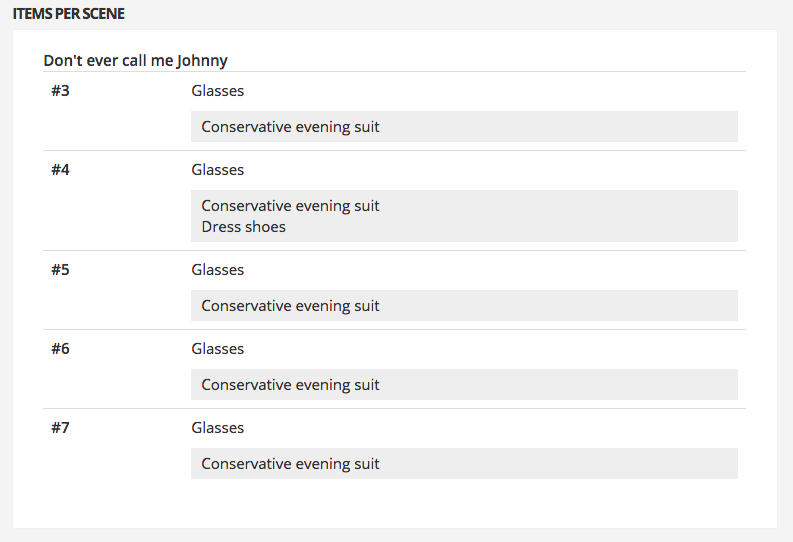 For characters, there are two different kinds of scene items, persistent items and non-persistent. A persistent item is something that a character always appears with, like glasses or a scar, and once added, this scene item is automatically added to every scene the character appears in.

In the space under the core character information, you’ll find any scene items already added. To those you can add scene item options. That is any alternatives you want to list. If the scene item is a jacket, you can use the scene item options to add jackets in different colors, different brands or models. The list makes it easy to remember what should be fitted or returned. Just click the menu beside each scene item to add an option.

You can also add new scene items and scene item options. This mean that you can build each character’s wardrobe and props outside of the breakdown.

In some territories, actors are partly paid by the number of dialogue lines. You’ll find an automatic report of this by clicking on Cast & Characters, and then on Report in the orange toolbar.

How the lines are counted

In the report, you’ll see the total lines per character and episode. If you do a feature, the line count is presented for the entire film.

There are two ways of adding images of the character and potential or actual cast members:

At the top of the character page, click on the Edit menu and select “Edit character”.

Click “Select image” or drag and drop the image on the larger square around the button to upload the image you want to portray the character in the character list and on the top of the character page. You can upload from your computer or mobile device. 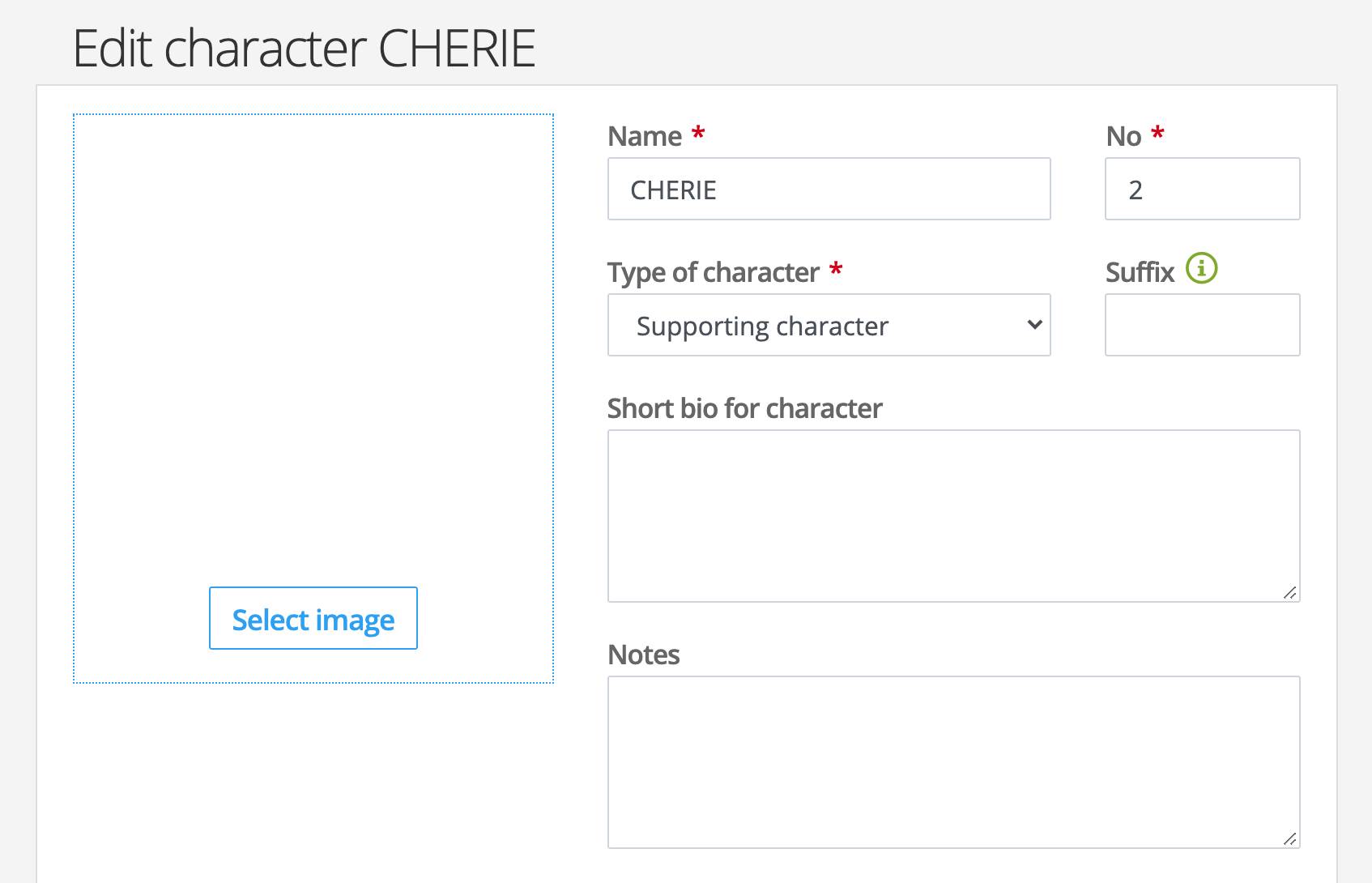 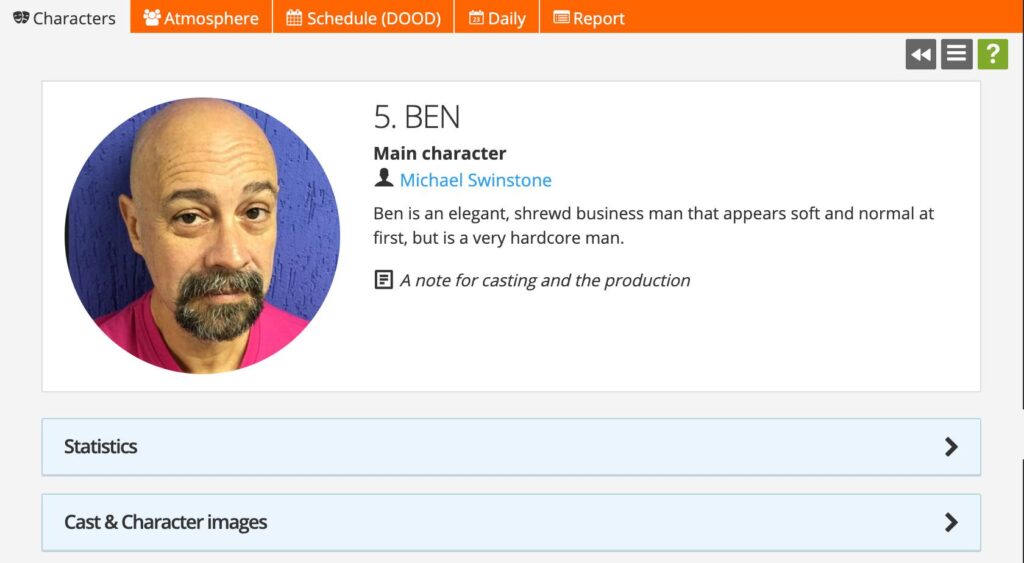 Simply drag and drop images on the “Drop images” box (max 10 at a time), OR click on “Select images” to upload from your computer, tablet or phone.

Only users with Production Admin permission as well as teams belonging to wardrobe, props and hair & makeup will be able to see the Character nav tab and add, edit, administrate and delete Characters. Learn how in the Roles and Permissions article.