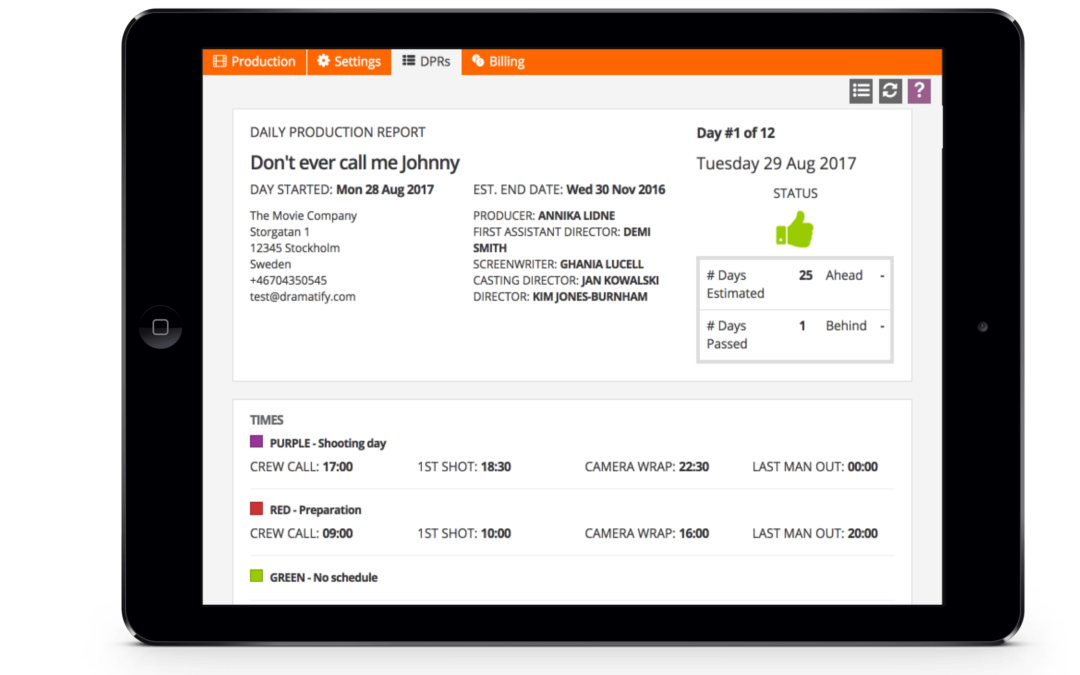 Dramatify launches another innovation for the moving image industry with the unique, smart technology-driven Daily Production Reports. Their automatic functions cut hours from each shooting day.

Failing to file the DPR in time might not only mean an angry executive producer but worse, that co-producers and bond companies may halt the production.

The Daily Production Report is an industry cornerstone

The Daily Production Report is a cornerstone for every film and TV-drama production, as well as many entertainment and documentary productions. It summarises the progress of the production as well as lists expenses, vital legal documents like personal releases and location releases, and adds important notes on subjects such as health & safety incidents.

Dramatify leads the development of innovative digital, cloud-based production management tools for the moving image industry. With the new automagic Daily Production Reports, Dramatify use smart technology to do the heavy lifting and automatically gather daily information from other smart Dramatify features such as:

The user can then manually add media usage, details and corrections as well as log expenses in multiple currencies. The digital version also includes scanned receipts.

A digital approval and signing process

When the report is ready, Dramatify’s smart digital approval and signing process starts, where signers are notified and then digitally can handle approvals, rejections and signing with just a few clicks.

That ‘time is money’ is a well worn platitude, but on set it’s an expensive reality. Every minute costs a lot. In an industry that mainly manage productions manually, Dramatify is dedicated to innovation by building smart digital tools that save time and money, so producers can focus on production quality and creativity.

Learn more in the tutorial!